In a wide-ranging interview at MWC Shanghai, the president of AT&T’s IoT unit said consumers and businesses alike were embracing connected car technology, adding the sector: “continues to have incredibly fast adoption”.

“Automobile manufacturers have really seen the value of having connectivity for their purposes – being able to update…and make that car better,” he noted.

“The consumer is also seeing the benefit of having everything they have on their phone in their car.”

Other sectors identified by Penrose as “hot” currently, include asset tracking, fleet management and smart city deployments. He added the healthcare industry was an emerging one he had confidence in, despite regulation challenges.

With so many diverse use cases falling under the IoT banner, Penrose said AT&T’s decision to deploy both LTE-M and NB-IoT networks allows it to host technologies with a range of connectivity requirements all using licensed spectrum. 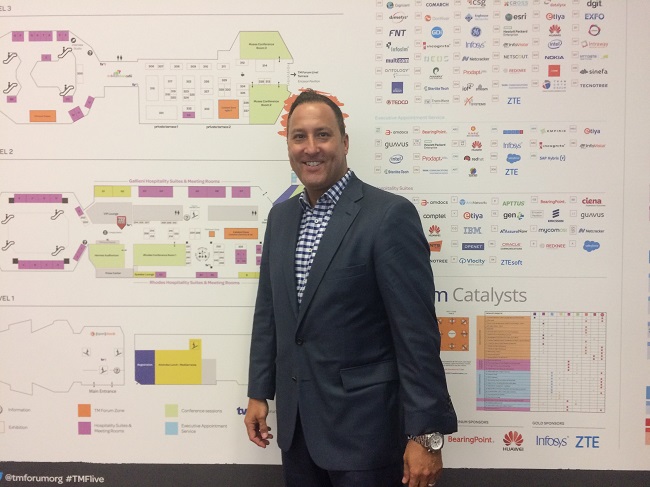 FROM TM FORUM LIVE, NICE, FRANCE: The different connectivity options set to underpin smart cities of the future are expected to account for between 5 per cent and 10 per cent of the total smart city value chain, providing a multi-billion dollar opportunity for operators such as AT&T which are already investing heavily in this area.

So explained Mike Zeto (pictured), general manager of AT&T Smart Cities, who said the US operator is already planning to take a much larger share than those percentages by “moving up the stack” towards applications and working with partners on the hardware side.

Zeto also noted 5 per cent to 10 per cent of a market which analysts such as Frost & Sullivan estimate will be worth around $1.57 trillion by 2020 is a sizeable opportunity on its own.

AT&T – which announced its smart city framework in January 2016 and formed strategic alliances with Cisco, Deloitte, Ericsson, GE, IBM, Intel and Qualcomm – is currently collaborating with around nine US cities on their smart strategies, including Atlanta and Chicago. It recently expanded beyond its domestic market for the first time, choosing Dublin as the launchpad for its future European expansion.

Irish capital
Zeto told Mobile World Live the Irish capital was an obvious choice, in part because many large US multinational corporations are based there, but also because Dublin and the Republic of Ireland in general are already engaging in a number of Internet of Things (IoT) initiatives and Horizon 2020 projects. He said the fact Ireland would still be part of the European Union once the UK completes its exit had “not really” played a role, but praised cities including Dublin and Cork for breaking down traditional silos and enabling the development of a number of services, including intelligent transportation solutions.

In the US the operator is focusing on critical areas with a major impact on the daily lives of citizens. These include smart irrigation systems and the use of IoT sensors to reduce leaks, a traffic intersection network solution to help improve traffic flow, intelligent lighting, and many more besides.

Furthermore, in March 2017 AT&T and the First Responder Network Authority (FirstNet) formed a public-private partnership (PPP) with the goal of building a modern, mobile broadband LTE network for first responders across the US. AT&T is investing about $40 billion over the 25-year life of the contract, while the government is investing $6.5 billion.

Zeto noted PPPs will also play a key role in creating smart cities, although many hurdles still lie ahead in the realisation of large-scale smart city projects. Cities have little choice but to respond to growing population levels. As Zeto pointed out, they are moving as fast as they can: “and that is the scary thing.”

The GSMA today announced the nominees for the 2016 Glomo Awards. Winners of this year’s Glomo Awards will be honoured throughout Mobile World Congress, which takes place on 22-25 February in Barcelona. In total, 285 nominees have been shortlisted for more than 40 awards over eight categories; the full list of nominees can be found at www.globalmobileawards.com/nominees2016.

“Congratulations to all of the nominees for the 2016 Glomo Awards,” said Michael O’Hara, Chief Marketing Officer, GSMA. “With more than 930 entries this year – a new record – the competition is greater than ever, reflecting the tremendous diversity and pace of innovation across the mobile world. We are particularly excited to be celebrating the 21st year of the awards with a dynamic new format that will recognise and honour achievement throughout Mobile World Congress.”

New for 2016, winners in the “The Connected Life Awards”, “Best Mobile Apps” and “Best Mobile Handsets and Devices” categories will be presented on Mobile World Live TV, broadcast directly from Mobile World Congress to a global audience viawww.mobileworldlive.com, with selected awards announced live. In addition, the broadcast is beamed to more than 60 screens in prominent locations across the venue, as well as 24,000 rooms in 180 hotels in Barcelona.

This year’s Glomo Awards will be presented by Suzi Perry, the face of BBC One’s Formula 1 programming for the past two years. As the first ever permanent female anchor, Suzi was the “Queen of the Pit Lane” for Formula One, MotoGP, Superbikes and Speedway. Her love of technology has seen her present “The Gadget Show”, a consumer-based tech show, for eight years. As a keen photographer, she fronted the popular “How to Take Stunning Photos” programme on Channel 5 in the UK. Suzi has numerous TV credits as both host and guest and enjoys radio broadcasting, often appearing on BBC Radio 2 and BBC Live. She has also written for many publications over the years including The Daily Telegraph and The Times, as well as on MSN.

Suzi will present awards on Mobile World Live TV and host the Glomo Awards ceremony, being joined at the Tuesday event by Ortis Deley. As well as fronting Channel 5’s flagship programme, “The Gadget Show”, Ortis spent 10 years at CBBC hosting shows such as “Live & Kicking”, “Shortchange” and “Best of Friends” and had his own Sunday Breakfast radio show on London’s Choice FM.

Also announced in separate ceremonies at Mobile World Congress will be winners of the “Government Excellence Awards”, which recognise governments from around the world for their innovation and leadership in use of mobile technologies in the public sector, and the “Outstanding Achievement” awards that include the “Chairman’s Award” and an award for “Connected Women Leadership in the Industry”.

The Glomo Awards are judged by independent experts, analysts, journalists, academics and, in some cases, mobile operator representatives. The winner of the “Outstanding Overall Mobile Technology – the CTOs’ Choice” award is selected by a panel of industry-leading CTOs from the worldwide operator community.

Full information on the Glomo Awards can be found at www.globalmobileawards.com.